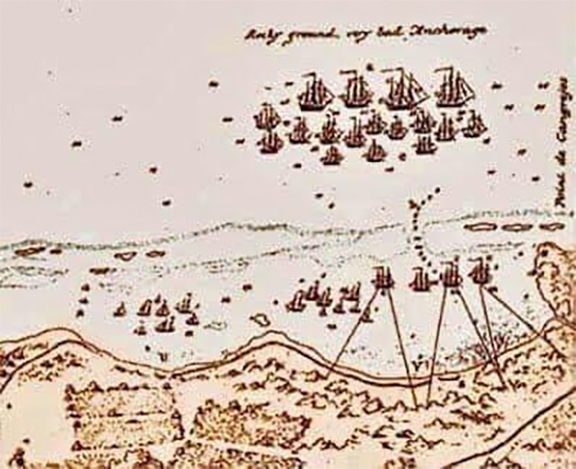 ISLA VERDE HAS HISTORY! Culturally speaking Isla Verde can and should rescue the rich history
stemming from the heroic role its inhabitants undertook in the 18th century. Isla Verde was part of the San Mateo Cangrejos parish and their defense against the 60 plus vessel English fleet commandeered by Ralph Abercromby , has come down in history.

On April 7, 1797, the English fleet sailed in directly from taking the island of Trinidad and clearly outnumbered the Spanish militia but the fierce negros and mulattoes who largely made up the Cangrejos coastal settlement, fought courageously for days on end until the English finally retreated and fled thus saving El Morro and San Juan from falling to the English empire.

As you can see in the map depict ed below, the English fleet entered through what is now the beach right in front of the ESJ and sprawled all the way to what is now still called Boca de Cangrejos at the eastern tip of the Carolina public beach. Shouldn’t this rich piece of history be shared with visitors in information and lookout areas along Isla Verde beach?