Toro Verde Adventure Park is located in the town of Orocovis, about an hour and 45 minutes from San Juan and hidden between rolling mountains covered in dense forest. The area boasts some of the most breathtaking mountain views on the Island, which you’ll see flying beneath you, if you choose to go ziplining. Since the park opened in 2009, its network of ziplines and suspension bridges has steadily expanded, and now includes two enormous ziplines, The Beast at nearly 1.5 kilometers and The Monster, the second longest zipline in the world, at 2.5 kilometers.

In the mountains at the center of the Island is a modern marvel of adrenaline-pumping adventure known as “The Monster,” a 2.5-kilometer zip line that is one of the longest in the world.

While the attraction has been popular with Puerto Ricans, it recently gained international celebrity status after Jimmy Fallon filmed a special “Desde Puerto Rico” (From Puerto Rico) episode of The Tonight Show in January. Along with singing and dancing with Bad Bunny through Old San Juan and enjoying fritters and rum sours with Chef José Andrés in Piñones, Fallon went flying at 95 mph over the mountains of Orocovis on The Monster. Since then, the attraction has gotten much more popular (so definitely make reservations if you want to make sure there’s availability. 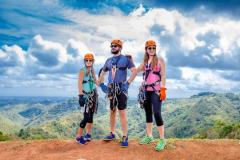 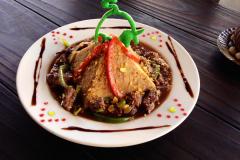